Jubilo Foundation is happy to announce the program Unlocking: Theatre in prison – Meetings with experts, a series of online meetings connected to the topic of theatre in prison. Each meeting will have a main theme that will be developed by the moderators of the meeting and their guests.

The aim of this program is to bring awareness to the wider audience on the theme of theatre in prison within the national and international sphere, deepening the knowledge of the realities that for many years have developed the professional theatre practice within Penitentiary Systems in Poland and abroad as well as stimulate a wider discussion with academics and practitioners related to the Penitentiary System, on the effect of artistic and cultural programs within prisons.

Meeting I: “Unlocking and the theatrical process”

For watching the full video click on the image –>>

Diego Pileggi is an Italian actor and director. He is a founding member of Odra Ensemble (2012), a physical theatre company run in collaboration with Song of the Goat Theatre, and of Italy-based theatre company Il Giardino delle Ore (2010). Diego Pileggi is the leader of „Oistros”, a theatre research expedition focused on the south Italian ritual of Tarantismo, as well as on traditional work/liturgical songs and knife fight. Since 2012 he has been a founding member and leader of Jubilo, a theatre company that develops work with groups marginalised by society.

In 2017, Diego Pileggi established cooperation with the Coordinamento Nazionale Teatro in Carcere (an Italian network of theatres in prison) and with the European theatre network, supported by the European Union through the Erasmus+ project (including Bratislava, Belgrade, etc.), which aims to use theatre tools to work with groups marginalised by society,and in the training of artists and directors.

Magdalena Mostenau – doctoral student and lecturer at the University of Reading (United Kingdom), researcher of intercultural theatre with education in the fields of theatre anthropology, actor training and cooperative theatre. Particularly interested in intercultural phenomena and migration, qualitative research and applied theatre. Since 2014 she has lived in London where she graduated from MA in Collaborative Theatre Making (Coventry University, 2017).

She is the author of the research project Easy As Pie, which anaglises theatre methods, storytelling and mindfulness as forms of social research, and co-author of the research project Arrival Lounge by Peeling Onions with Granny. Before leaving Poland, between 2011-2014 Magdalena worked as an assistant director and actress at the Powszechny Theatre in Radom, the Polish Theatre in Warsaw, the Baltic Opera in Gdańsk and the Wybrzeże Theatre in Gdańsk.

Meeting II: “Theatre in prison as a tool to fight against gender stereotype”

The second meeting of the cycle will focus on the theatrical work of
Agnieszka Bresler, leader of Kolektyw Kobietostan and co-founder of the project Unlocking of Jubilo Foundation, within the prison environment. Martyna Dębowska will dialogue with Agnieszka Bresler on her work approach and the difference of application of her methodology with male and female groups within
the Penitentiary System across Poland.

For watching the full video click on the image –>

Agnieszka Bresler – actress, director and theatre pedagogue. Winner of the City of Wroclaw 30 Creative Wroclaw Award in the category Art/Design in 2018. Graduate of MA Acting at Manchester Metropolitan University in England and of Physical Theatre Practice at Adam Smith College in Scotland. For many years she co-founded the Jubilo Foundation.

Since 2016, she has been running the Kolektyw Kobietostan, which directs its artistic activities to socially excluded women, female prisoners and shelters for homeless women. For two of the Collective’s productions, the monodrama “Kobietostan. Choir for one actress” and the play “Maria K.” with the participation of women from the Penal Institution in Krzywańcu – was nominated for the WARTO award of Gazeta Wyborcza in 2019.

Her research interests include literature theory, broadly understood feminist and gender criticism and contemporary French philosophy. Professionally manager and theatre producer. Since 2018, she has been cooperating with Jubilo Foundation in Wrocław, where she coordinates theatrical projects against social exclusion, including “Unlocking”, project which has been carried out for many years with inmates of the Penitentiary No. 1 of Wrocław, in cooperation with the Grotowski Institute.

Martyna was also responsible for the production of the play “Cain”, which premiered in March 2019, and for the dramaturgy for the play “On the Other Side: Concert for Piano and Silence”. (Premiered in December 2019 at the Grotowski Institute). Since 2019 she has been a member of Kolektyw Kobietostan.

The third meeting of the cycle will focus on the general situation of theatre in prison in Poland. Magdalena Hasiuk, researcher of Instytut Sztuki PAN, will dialogue with Adam Szymura and Jerzy Majda, theatre practitioners who develop their work in the prisons of Gliwice and Kwidzyń. The focus of the meeting will be the methodologies of the artists and their compared approach in relation to the topic of theatre in prison.

For watching the full video click on the image –> 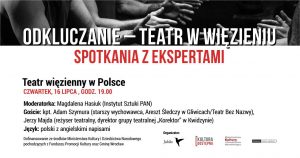 Magdalena Hasiuk – Author of scientific articles, critical sketches and reviews devoted also to theatrical work carried out in Polish prisons, published in collective volumes and Polish and foreign periodicals. Translator of Jacques Lecoq’s book “The Poetic Body”. Currently, together with her team, she is implementing a research project devoted to the Węgajty Theatre financed by the National Science Centre. She works at the Institute of Art of the Polish Academy of Sciences in Warsaw. She is the author of books such as “Cruelly Strange Side of the World” and “Around the Prison Theatre”.

Adam Szymura – educator in the Detention Centre in Gliwice, author of plays for children and teenagers, winner of several poetry and theatre awards. From 1989 to 2005 worked in the Stanisław Wyspiański Silesian Theatre in Katowice as a sound engineer. In 1996 he founded his own theatre stage; the original Batis Theatre, based in Katowice, which ended its activity in 2006. On 15.03.2006 he joined the Prison Service.

Jerzy Majda has been for 16 years running his own theatre group, Grupa Teatralna Jerzego Majdy – as the author of scripts for all the plays and director. During this time the group has staged about 200 performances, from Stegna by the sea to Jaworzno in Silesia; from Kartuzy in the west to Pasłęk in the east. Jerzy Majda is also the author of 4 radio plays and 2 books. For 4 years, as a volunteer, he has been running Grupa Teatralna KOREKTOR in the Penitentiary in Kwidzyn. In 2018, KOREKTOR took third place in the 5th National Competition of Prison Theatrical Creation, and a year later won the competition.

The cycle of meetings with experts is part of the project Unlocking, co-financed by the Ministry of Culture and National Heritage from the Culture Promotion Fund and by the City of Wrocław.